Stearns Wharf, the oldest working wood wharf in California, was built in 1872 by John Peck Stearns to facilitate the transfer of cargo and people from ships to shore. In 1925, the State of California, conveyed the Tidelands and the Harbor area to the City to be held in trust for certain priority uses and purposes. In 1926, Max Fleschmann offered the City of Santa Barbara $200,000 toward the construction of a harbor if the City would match the amount. A detached breakwater was completed in 1928 with an extension to shore constructed in 1930. Sand accretion began immediately with Leadbetter Beach and the current harbor commercial areas being created within seven years after the breakwater as completed.Up until the 1870s, Santa Barbara was virtually cut off from the outside world by its natural barriers of the ocean and the mountains. In 1867, John Peck Stearns moved to Santa Barbara and opened a lumberyard at the foot of State Street. Mr. Stearns noted that the town needed a long wharf so that Ocean ships could tie up at low tide. In 1872, with the financial backing of Colonel William Welles Hollister, Stearns completed the Wharf and Santa Barbara’s isolation from the outside world was over.

The Wharf has endured since 1872, making it the oldest working wooden wharf in California. It is 2,300 feet long and has an area of 3.8 acres supported by 2,307 pilings. There are currently seventeen businesses on the Wharf including three restaurants, a shellfish market, a bait and tackle shop, tourist oriented shops, a Channels Islands exhibit hall and a marine museum.

In 1878, A Chinese junk crashed into the Wharf during a severe storm, destroying 1,000 feet of decking. Before this damage could be repaired, the first tornado in the City’s history struck on New Year’s Eve, causing even more damage to the Wharf. In 1887, due to the heavy and regular tread of two hundred Civil War Veterans, the Wharf almost collapsed which would have thrown 3,000 people into the ocean. That same year marked the arrival of the railroad into Santa Barbara, signaling the decline of ship traffic.

In response to the arrival of the railroad, J.P. Stearns built a 1,450 foot wye onto the Wharf to carry a railroad spur so that lumber could be quickly transferred from ships onto flat cars. The wye proved too expensive to maintain and was abandoned, after being battered by more than a decade of storms. A small portion of the wye remains today, housing the Sea Center marine museum and the Nature Conservancy exhibit hall.

In 1921, the Wharf Narrowly escaped destruction by fire. The 600 room Potter Hotel burned down and a 50-mile-an hour gale sent sparks which ignited the pilings on the Wharf and palm trees along West Beach.

In 1973, the famed Harbor Restaurant was destroyed by a spectacular pre-dawn fire, closing the Wharf. The Wharf was reopened eight years later. The Wharf was rebuilt with approximately the same building area that had existed previously and the same number of parking spaces. There had been other proposals for considerable increases in commercial space on the Wharf, but they have been denied by the Coastal Commission during the 1970’s.

In June 1986, a fire occurred on the shoreward finger of the Wharf. A fire caused by a damaged water pump caused heavy damage to the recently opened Sea Center as well as damaging the Wharf underpinnings and the Nature Conservancy building. The two grey whale models exhibited in the Sea Center building were not damaged but the shoreward finger of the Wharf was closed for six months for repairs….

Santa Barbara, California, November 23, 1998, A fire erupted in the vicinity of Moby Dick’s restaurant on Stearns Wharf Wednesday night, November 18, about 9:40 p.m. after the restaurant was closed for the evening. Fueled by the creosote preserved timbers of the wharf structure, the fire spread quickly. It consumed 420 feet of an outer segment of the 2,300 foot long wharf before being brought under control at 6:45 a.m., Thursday morning. Three businesses were totally destroyed by the fire: Moby Dick’s Restaurant, Mike’s Bait and Tackle Shop, and Santa Barbara Shellfish Company. 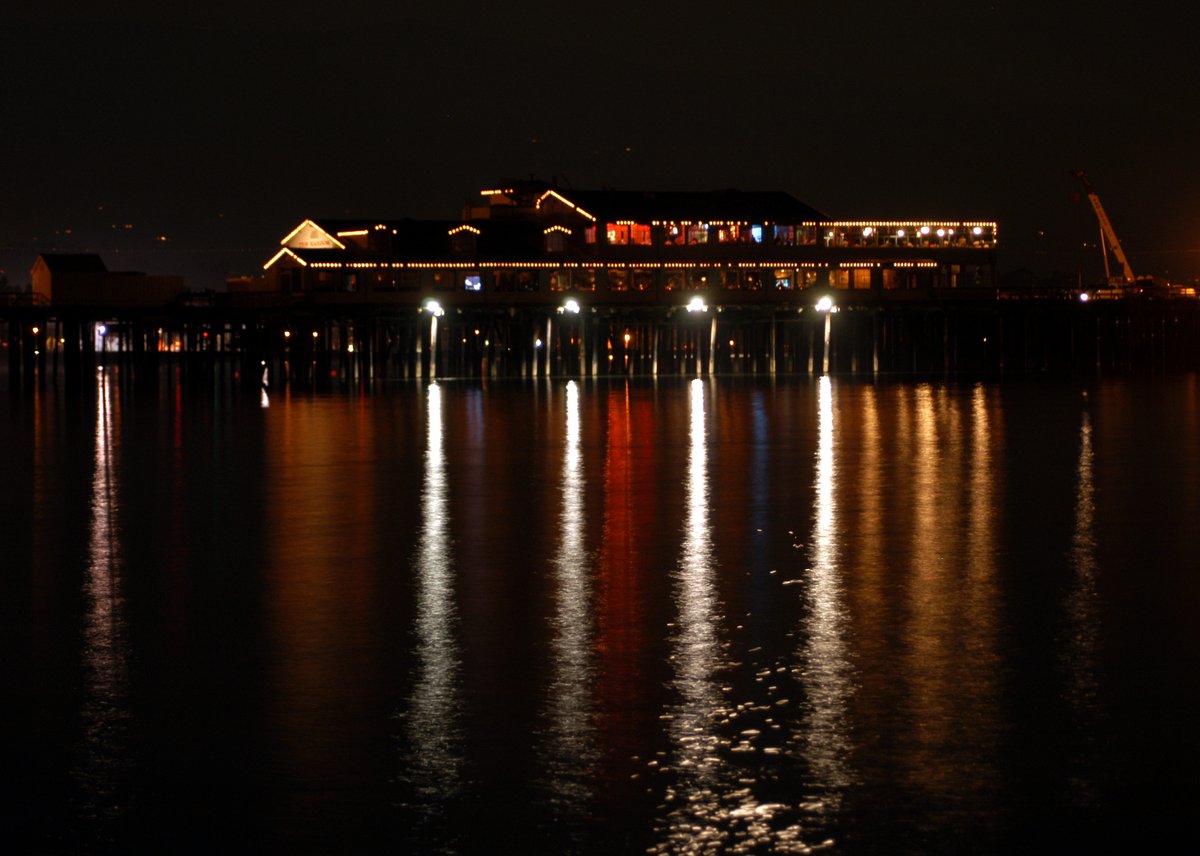